There’s nothing quite like sitting in the audience of a stunning theatre and watching your favourite stories brought to life on stage.

That was until Disney released its magical VR advertising campaign to promote the Aladdin musical on Broadway.

Giving consumers an immersive theatre experience through their screens, Disney created an interactive 360° video which allows people to delve into the performance in unique detail. 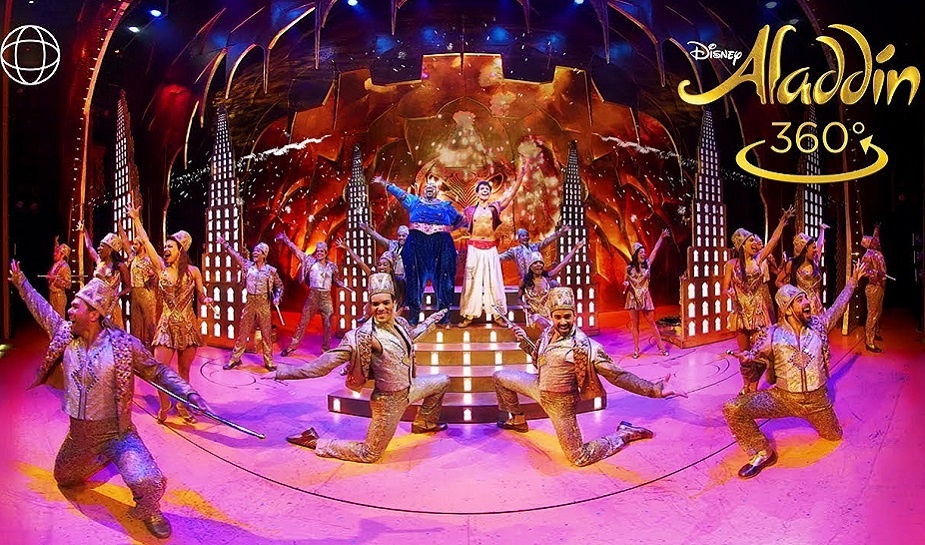 Offering a glimpse behind the curtain, the video captures the Genie performing the song ‘Friend Like Me’ to Aladdin exactly as its done on stage.

However, there’s an added virtual reality twist to make the experience even more captivating.

The camera, seemingly positioned at the edge of the stage, offers a view that is even better than the front row. As the performers tap, smile and sing their way through a truly spell-binding rendition of the hit song, the viewer can explore the scene all around them, taking in every action from the middle, sides and even below the stage to the orchestra.

To help guide their way through the video, special effects of a fairy tale golden shimmer – in true Disney style – directs the person towards little known facts and background information about the production. These include, ‘there are 337 handcrafted costumes in the show’ and ‘during the course of Friend like Me, Genie travels the equivalent of 24 basketball courts in 8 minutes’.

The clever technology makes the viewer feel like they’ve been transported right into the heart of the show; offering a taste of what they could see if they purchased a theatre ticket.

To direct users to YouTube and increase the numbers of views, the video sits as part of a wider advertising campaign. Whereas previously Disney has simply hosted videos on its website, this time it is aiming to grow the number of video views by running it in click-to-expand display banner ads and pre-roll video ads online. In the first two weeks of the campaign going live, over 50,000 people had watched the video on YouTube.

Capturing the Broadway experience in a static advert is hard to achieve which is why this format works brilliantly to promote the show. The imaginative and engaging content fully immerses the viewer as they navigate their way around the stage and choose what they want to see. It shows enough to reel them in without giving away too much.

Virtual reality is a very effective tool for giving consumers a taste of what they could experience in real life. Many travel and tourism brands have benefited from using virtual reality campaigns to boost visitor numbers. The Dali Museum launched an enchanting VR experience to take viewers on a journey of the surrealist world of Dali. And Royal Caribbean Asia took users on a virtual tour of its luxury cruise ship.

Creating a 360° film is a lot more complex and technical than shooting a regular video. Read our top tips and tricks for filming a top quality 360° video here.